The Windows PC application is just released. A significant improvement, when compared to the Web versions of the solvers, is that it will store the successive results of the simulations you led into a table, that can be copied and pasted into a spreadsheet. Solvers were also refined, convergence was improved, 3 were added.

Since the log is on (January 2020), and until January 2021, solvers were activated more than 4500 times. You were more than 320 different users from 45 countries. The most activated solvers are

Of course, it makes sense, as those circuits are widely used and not always straightforward to bias. 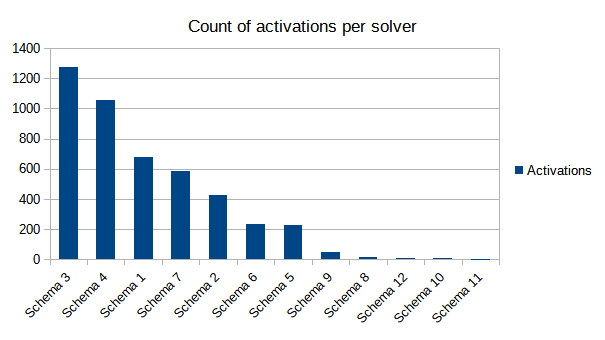 Back to tubes / valves

By fall 2019, my daughter, playing bass guitar and drums, purchased a modern 300W amplifier. But she was curious about the mythic sound of vintage tube amplifiers. Hence did I decide to jump half a century back by designing, building and offering her such a tube amplifier…

I designed and assembled the whole stuff but for sure needed guidelines to refresh my memories. I found many helpful sites crucial to correctly design schematics, select and procure components. I bought most parts, from chassis to transformers and tubes, by the German shop Tube-Town. Meanwhile I was really scared when first powering up the 430V supply, fearing possible arcs, an always possible electrocution (350V shocks of the past surfaced…), or snowy explosions of electrolytic capacitors. Nothing bad happened and the expected 35W were there.

Among the many web sites (there was a lot to my surprise) I visited, I found particularly interesting these links

My contribution: a collection of triode solvers for DC bias

This web site is my contribution to the “tube community”, offering a set of solvers able to compute the operating points (DC bias) of the basic low-level circuits that are found in all tube amplifiers: gain stage, cascode, cathode follower, phase inverter.

I programmed them for people who already are aware of tube design but who may feel uncomfortable with true simulation Spice-tools. One solver is needed per circuit. Luckily, the small number of circuits variants allows this simpler approach.

They are not perfect, they are in no case real circuits, and I am not liable for any wrong designs you may create after them! And never forget that playing with tubes is very dangerous because of the required high voltages!

All solvers use the modelling of triodes proposed by Norman Koren in the 2000’s, as described in http://www.normankoren.com/Audio/Tubemodspice_article.html taking advantage of his “new equations” and the parameters he indicates for the triodes 6DG8 (ECC88), 12AU7 (ECC82) and 12AX7 (ECC83). For other tubes (12AT7-ECC81), I took parameters from Spice models found on the Web.

I had also considered other models proposed by Dempwolf und Zölzer and Cohen and Hélie which take into account grid current. But as basic stages normally do not operate with grid currents, I decided to not implement them; in addition, my understanding is that they are based on little experimental data (only ECC83), they seem to model a somewhat too high grid current at null grid voltage; and one of them was simply not implementable because of a non documented parameter.